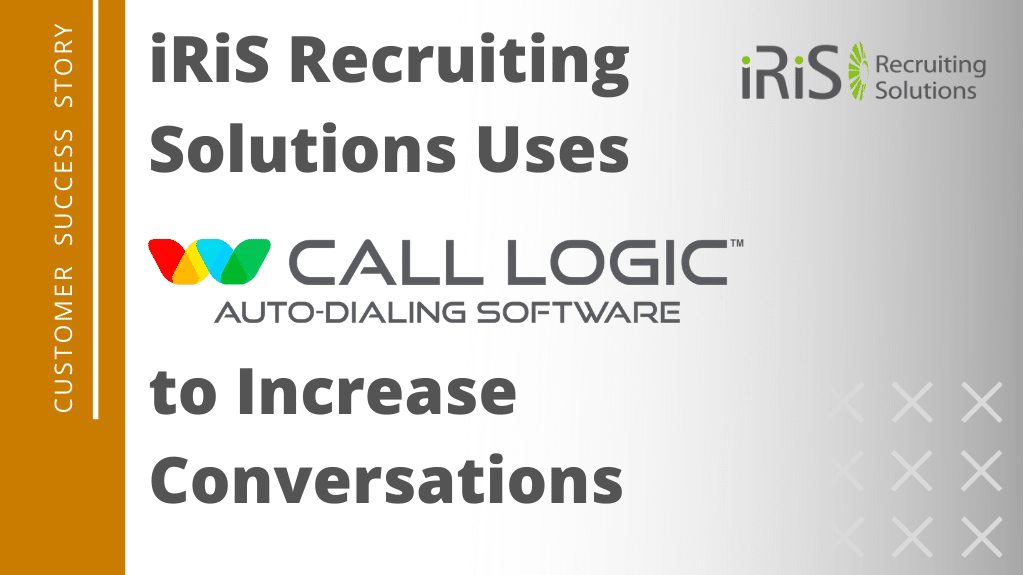 Founded in 1995, iRiS Recruiting Solutions is a recruitment firm and MRI Network affiliate based in Carmel, Indiana. Under the leadership of Chad Peddycord, President of iRiS Recruiting Solutions, the company is ranked as one of the top recruitment firms in the country. The company also serves various industries including retail and grocery, supply chain, engineering, construction, and manufacturing.

Over the years, the recruiting industry, like many industries, has changed with the adoption of new communication tools (email, texting, and social media). For Chad Peddycord at iRiS Recruiting solutions, the utilization of these new communication tools meant that they had to adapt their contact strategy with their clients and candidates. As many recruiting firms have relied on a few communication tools and neglected others, iRiS adopted them all but took on a different approach. The addition of Call Logic has enhanced their contact strategy by enabling their recruiters to reach more contacts, have more conversations, and find top talent for their clients.

Recruiters at iRiS weren’t reaching their full potential when it came to outbound calling. The problem, according to Chad, is that they were a victim of their own bias. From a contact list, recruiters were selective with who they wanted to call. The hesitation to call certain prospects was caused when they saw a note in their ATS or information they didn’t like. Chad reflected on the experience and said this: “Our good, talented recruiters wanted to cherry-pick. That bias was causing us to miss people. Honest to goodness, we win more often when we just give everybody a five-minute shot”. In order to maximize opportunities, and find talent for their clients, the mentality needed to shift.

Externally, iRiS recruiters had another challenge- getting noticed. like many recruiting firms, Chad’s recruiters had to endure trying to be noticed by their clients and candidates. Why? Chad pointed out that the problem used to be finding contacts. Now, with business databases, LinkedIn, and the internet, that’s easier than ever. The problem today is dealing with what Chad refers to as ‘noise’. Today, there are more communication tools than ever. Email, text, phone, and social media like LinkedIn. People are getting bombarded with messages every day from many companies. To be heard through all the noise, Chad needed to develop a strategy.

In December 2016, Chad attended a best practices group with other recruiting firms. It was in this group that he heard of Call Logic for the first time and instantly saw the value. Call Logic is a web-based calling assistant that eliminates the manual dialing process. Also, users have the flexibility to leave either a manual voicemail message or a prerecorded voicemail message. This solution enables recruiters to reach more contacts and hold more conversations.

While some recruiters are hesitant to make outbound phone calls and rely on a few means of communication, Chad’s firm embraces utilizing all of them efficiently. Call Logic was implemented into their ATS, PCRecruiter, for his recruiters to call both clients and candidates. For Chad and iRiS Recruiting Solutions, the winning tradition continues.

“Saw a 650% increase in callbacks after implementing Call Logic”

The addition of Call Logic has been icing on the cake for their contact strategy. If a voicemail is reached, iRiS recruiters have the flexibility to either leave either a manual voicemail or a prerecorded one. They’ll then initiate further contact by sending an email, text, LinkedIn message, or a combination of the three. With multiple communication channels utilized, Chad’s recruiters are getting noticed and reaching more contacts. “There are so many communication frequencies that you can reach people on so you have to employ them all. You have to be as efficient as possible because I don’t know where you’re going to tune in to my message”, Chad reflected. For Chad, Getting noticed and becoming memorable happens when your cadence is just right and you become informative. By utilizing multiple means of communication, they’re getting noticed and receiving responses from candidates. Chad stated: “I think that when we make memories, we always talk about how memories are formed with multiple points of connection”.

Also, the call quality has improved tremendously resulting in returned calls. A combination of a positive mindset and the elimination of fatigue from manual dialing is one of the reasons for their success. An advantage for iRiS recruiters is to hold a call block using Call Logic when they have a high energy level. This allows them to project their best version of themselves when leaving a voicemail message or during a call. Chad elaborated, “If I’m going to leave 35 voicemails per day, I want them to be punchy and I want them to have some dynamic range into the way I deliver”.  The results have shown. Chad reported that in the month of October 2020, one iRiS recruiter, in particular, received 229 callbacks. In October of 2019, that number was 35 callbacks. Chad sites that a combination of Call Logic and the fact that many people have been more apt to listen because of the COVID-19 pandemic has contributed to this success.

At iRiS Recruiting Solutions, outbound calling is a lot like sports. For example, Michael Jordan didn’t become the best basketball player in the world by hesitating to take shots. Regardless if he made them or not, he continued to take them over and over again. This is what made Michael the best and this mentality has transferred to Chad’s recruiters. Instead of previously deciding on which contacts they wanted to call, now they’re giving every contact a chance.