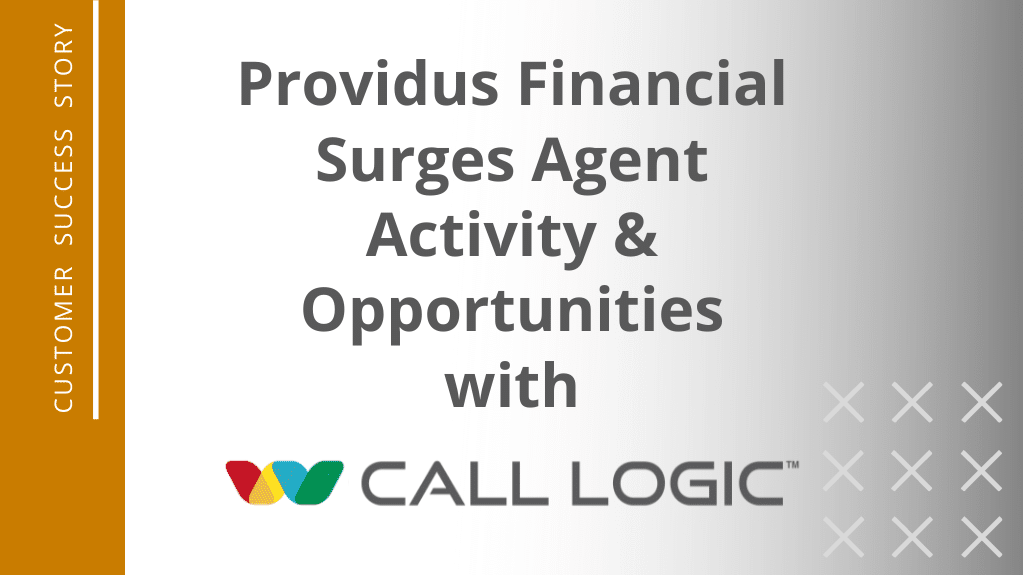 More activity increases sales opportunities and growth. Outbound calling is a cost-effective strategy to do so, but most growth occurs when it’s done efficiently. Josh Knowles, Principal at Providus Financial, helped his agents increase their activity and sales opportunities with Call Logic. With what started as just a few agents, now, many of his agents are calling him wanting to get started.

After working for a captive Agency for several years, Josh Knowles decided to make a career move and become an independent agent. That’s when in 2009, Josh, and his business partner, founded Providus Financial. The core of his business consists of 20 full-time agents, and there’s a brokerage side to the business too. They have locations in Shreveport and Monroe, Louisiana.

View Transcript of the Call:

For the last few years, Josh has been searching for a solution to increase his agent’s activity and call volume. But he kept hitting a dead-end. “It seemed like everything I looked at wanted me to move my VoIP and all my other providers,” explained Josh. “I just wanted something that was a simple add-on.”

Overhauling his systems for the simple need of boosting activity would have been a headache (and a major time investment too). From training to overcoming learning curves, it just wasn’t practical to make a change.

Once Josh discovered Call Logic, he knew found what he was looking for.

Call Logic is a one-to-one dialer software. Used by thousands of professionals, it’s built to increase outbound call volume by 300% versus manual dialing. That means for every 10 Calls made dialing by hand, Call Logic can dial 30 calls in the same amount of time.

According to Josh and like many sales professionals, it’s all about the numbers.

“It doesn’t matter if you’re selling insurance, or cars or timeshares, whatever it is, it’s a numbers game.” And with Call Logic, their outbound call numbers are high.

For example, he had his call center agent dial through a list, and her productivity soared.

“I think I gave her, a week and a half ago, a list that had 4000 people on it. She’s already gone through that thing two full times. There’s no way you could do that if you’re picking up the phone and dialing.”

They’ve also been able to achieve higher call volume because of Call Logic’s prerecorded voicemail feature. This feature saves their energy and time from having to leave the same verbal message over and over. Instead, they can leave the perfect voicemail every time.

“It’s a time saver because as that thing is leaving your voicemail, you can be on to [making] two or three more phone calls. That’s a really cool feature and it keeps you from getting worn out leaving a message over and over.”

More numbers equal more opportunities, and in doing so, he discovered a new strategy.

Making Headway in a Profitable Niche

One target audience that the company has found profitable is helping those tuning 65 with Medicare Advantage and Supplement plans. But Josh never invested a lot of time in prospecting to these folks. Why? They were already being contacted by competitors. It was too saturated.

But that changed once they obtained a list of people turning 65 in the next 4-5 months. Now they’re ahead of the curve and can build a relationship. Josh explained:

“I can get a list of people that are turning 65 for the next four or five months, and I can load that up into the Call Logic system. It just back-to-back dials numbers until somebody picks up on it.”

According to Josh, by being local and ahead of the curve, they hold a competitive advantage that the big companies don’t have.

“I’m somebody that’s down the road from them. I’m in their community, and they get a lot from these other big call centers. They’re getting calls all the time, and I think that’s worked to our advantage somewhat because it’s nice to hear from somebody that’s local, somebody that knows where they are and who they are. And what doctors they need to see and what networks those plans need to include.”

Integrating Call Logic into his current processes was also easy since it’s so flexible.

One of the best advantages Josh and his team experience when using Call Logic is the freedom to access the system from anywhere. This is because it’s web-based. As long as there’s an internet connection available, his team can work from a desktop, laptop, or tablet. Portability contributes to more productivity in his opinion.

“I can take this thing to the lake and do it from the back of my boat”, he explained. “Just having that can increase your activity. You’re going to see your productivity increase because you’re able to do so much more with it.”

With what began as three agents using Call Logic, it has quickly grown to nine. The word is out.

“I had two agents call me. One on Friday and one today said, “Hey, can you set me up with that Call Logic thing?” It just keeps growing. I’m excited about it.”

Learn how you can increase your sales opportunities by 300% and drive more production with Call Logic by clicking here.