5 Rookie Recruiting Mistakes to Avoid at All Costs 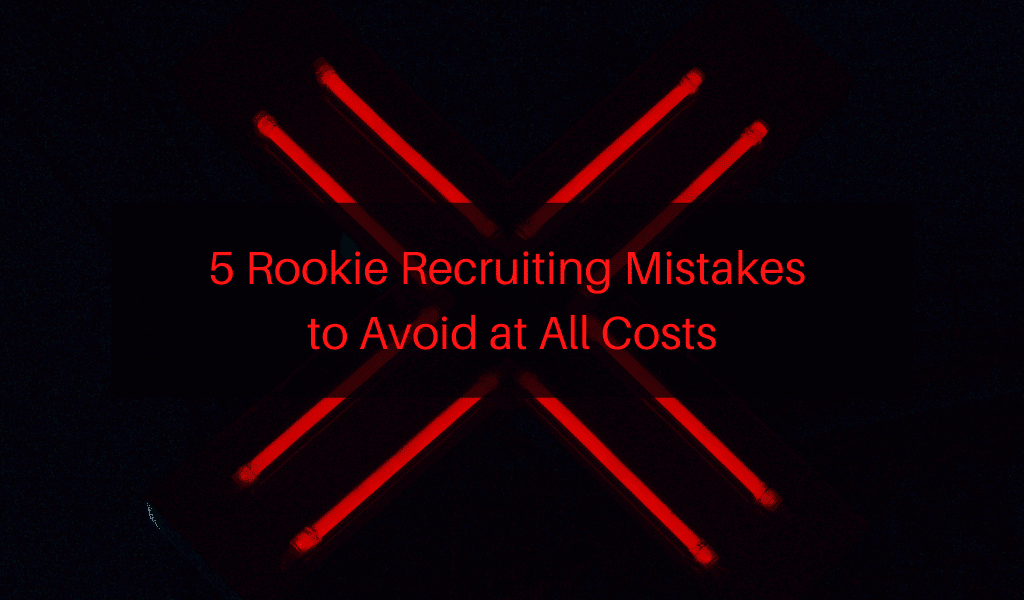 New to recruiting? Don’t make these rookie recruiting mistakes, or you could be looking for a new job.

First, take a deep breath. You will make recruiting mistakes as a rookie. In fact, you’ll make a lot of them. Almost all of them are minor learning experiences. For example, you forget to return a phone call or refer to someone by the wrong name in an interview. Sure, it’s embarrassing, but it’s not career-ending.

These are the experiences that help you grow and improve. Unfortunately, some mistakes are more devastating. And if you don’t learn from them quickly, or better yet, learn how to avoid them altogether, you could end up with angry prospects, upset companies, and little to show for your recruiting efforts. Luckily, some of the worst recruiting mistakes are also some of the easiest to avoid.

Call Logic’s auto-dialer and call management software offers dozens of helpful tools to increase your success and simplify your daily tasks. Call for your free consultation today to learn more!

These are the 5 recruiting mistakes you need to avoid

1. Failing to prepare for interviews. This isn’t just a rookie recruiting mistake; veteran recruiters make this mistake, too. Even so, it’s one that you don’t want to make. If you’re unprepared for an interview, it makes you and the hiring company look bad. And if it’s an especially bad interview, you may find your candidate will move on as quickly as possible. There’s a lot that goes into a good interview, such as knowing the job qualifications, the company culture, why the position is open, and more. In addition, it requires you to be organized, punctual, and professional.

2. Failing to stay in touch with candidates. You made the cold call, you read the resume and cover letter, and you set up the interview. The candidate took the time to talk with you on the phone, write a cover letter, meet with you in person or virtually, and then… nothing. The candidate doesn’t hear anything from you for days, a week, then two weeks. They get another job offer and take it, just when you were about to call them with an official offer. A job seeker isn’t going to wait around for you to get back to them. Not only that, but if you don’t keep them apprised of what’s happening in the hiring process, they won’t be interested in working with you. Even if you don’t have an update, get in touch at least every few days. This keeps the relationship going, and it’s just good customer service.

3. Failing to respect a candidate’s time. Either of the last two recruiting mistakes could fall under this banner. When you don’t prepare for an interview or keep a prospect updated during the process, you tell them their time and effort aren’t that important to you. But there are other ways you can fail to respect someone’s time, such as not starting or ending an interview on schedule.

4. Recruiting someone for the wrong position. Here’s another among the recruiting mistakes that rookies and veterans alike can make, especially when there’s pressure to fill positions. However, recruiting someone for a position they aren’t qualified for is setting them up for a disaster. Similarly, recruiting an experienced, highly-qualified candidate for an entry-level or junior role shows a lack of effort in trying to fit the right jobs and the right people together. Be aware that doesn’t mean that “overqualified” candidates might not be amenable to a lower-level position. But tread lightly in those waters.

5. Giving up too soon. This is one of those rookie recruiting mistakes that won’t hurt you directly, but will wear down your progress over time. You find a few great candidates for a position, call them or send them an email, then give up when you don’t hear back. Pretty soon, you whittle down your prospects to almost nothing. The fact is, recruiting is, to some degree, like sales. You can’t expect to hit a home run with one call. You need to build relationships and prove that you have the commitment it takes to convince someone to give you their time and energy. If you give up after one or two unanswered calls or emails, you’ll never find success.

There’s no question that recruiting takes some finesse, especially if you’re cold calling. But if you can avoid these recruiting mistakes, you’ll have a much better career ahead of you. And what if you do make some of these mistakes? Mistakes, both large and small, will happen. Learn something from them and move on. Correct the mistake if you can, but don’t let it derail you.

Maintain customer profiles, automate processes, and reach more customers with Call Logic’s call management software. Check out a free demo to see what we’re all about!